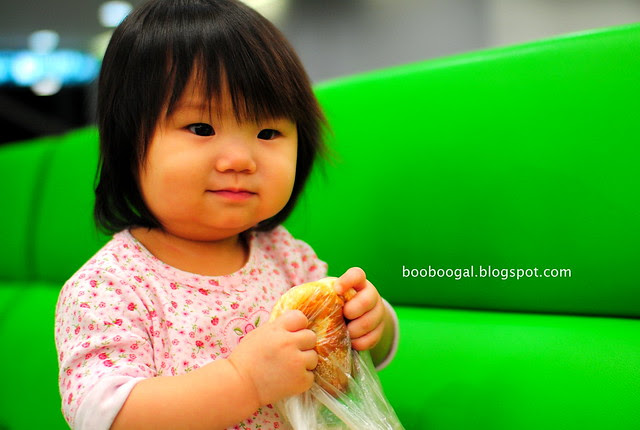 the almost 10 months old bb thinking about her future as a breadtaster..

It's been a month plus and BB is growing well! (Or as well as I think it should be) She can crawl super fast, chasing me from the living room to the bedroom or the washroom the moment she detects that I have "escaped" from the room and she can stand up by herself. She can also cruise, and clap her hands and have 2 lower front teeth growing out. Also blabbered some sounds here and there. her facebook page is: http://www.facebook.com/bbmirei

We're in Singapore right now, after settling  big hooha regarding my spouse visa expiring. At least I've learnt a lesson, next time i'll set a calendar reminder to renew the visa!

It's been quite a busy few weeks in SG, with work and settling bb in, and also meeting up with friends, helping out with my sister's wedding stuff. (maybe we have been very little of a help since now the bride seems to be in a very bad mood) The past week has been great with my sis (& future BIL) around though, being very nice in dropping us off at places and picking us up. There were the very interesting nightly chats about dumb stuff that kept us up late at night (besides bb waking up at night for her milk) that I did miss being away from my sisters. At least bb seems to be adapting to life here, and has been going to her grandparents for cuddles instead of just me. Even her aunts have been approved by her as allowed to carry her. One of the changes for this age is her shyness to strangers. She starts crying when she meets new adults (my friends) unless I'm carrying her, although she is kpo about what they are doing, she doesn't want to let them touch her, or she pretends to be just playing with her toy and takes secret glances to see if anyone is watching her. & she has the play hard to get character, such that even after she allows people to carry her, she refuses to look at them straight in the face, and just keeps turning her head to avoid eye contact. (>.<)

I managed to read quite a few books the past weeks: the Happiness Project, 1Q84, and some Stephen Clarke books. (His books on France and parisiens and their lifestyles are hilarious). 1Q84 left a very deep impression on me; it's the kind of book where you end up thinking "What??? I don't understand!" but yet the plot was simple enough to follow to the end despite the large number of characters introduced here and there. I wonder if I would be able to actually follow through it if it had been the Japanese version. But I haven't felt like that in a long time, that I needed to finish a book before I slept (not successful since the book was too long and took me a week's nights to finish)

Taking a break from all the craftwork as well, but have to finish crocheting a pouch for my cousin as already promised. Doing something new this time, added a strand of shiny yarn to the original woolly yarn to give the pouch a touch of elegance. I hope the end result is pretty!

I am very much looking forward to Jay's concert at the end of the week. It's been years since I've gone to his concert, I think it was when I was still in university. 2002??? 11 yearS!? wow.. it was alot easier to get tickets for him then, and only half the price for the cheapest tickets. I haven't even heard his latest album yet though, so I guess I've to be ready to hear some new songs in the concert. Slightly worried about how bb will cope that evening, but I think she should be ok?? since Ryo should be here by then :D

More on the wedding next! (next as in the next time i find time to post.. :P)